Augmented Reality (AR) has crossed a significant threshold in its development with the recent introduction of hardware and programmatic kits such as the HoloLens and ARCore/Kit. It is now more accessible to end-users who may wish to adopt this technology for their specific domain purposes. The moment is ripe for architects, who comprise one such group of end users, to explore the potential of AR and critically evaluate where it can be used to enhance and even challenge established workflows.
If AR does indeed have the potential to disrupt how architecture is currently conceived, represented and materialised, then it would be critical to expose students to such technology. Specifically, this project explores how AR can be utilised as a tool for architectural design, construction and assembly. It is hoped that the success of this project and contribute and possible shape the nascent discourse around immersive technology in the architectural domain.

The Design Objective
My team was tasked to design a pavilion and use AR as a tool for its assembly. The AR plugin "Fologram", together with 3D modelling software Rhinoceros were used as the backbone of this project. In the design of the Pavilion, computational methods were used to develop the form and connections of the primary building block that was given. The blocks themselves are tetrahedral light tubes that when assembled, has the ability to create varying forms. The pavilion will serve as an exhibition booth and must be able to accommodate a group of 5.
The image on the left shows the final design that was computationally generated.
Construction Method with Augmented Reality
Considering the potential of AR in physical fabrication and construction, my team decided our assembly method to be 100% digital. This meant no relying on any piece of physical documentation to guide the building process.
In this augmented assembly method, we delegated an overseer who will wear the HoloLens. The overseer will be responsible for tracking the scheduled progress of the assembly and will direct the construction team from a distance. As the pavilion design is dome-shaped, we have divided the structure into quadrants. Each quadrant is taken up by a team member. These team members will then use their mobile phones to connect to the Fologram server to receive the steps of the assembly.
The assembly is broken down into layers. In this system, the pavilion is built from the bottom up. The overseer has the ability to control which layer of construction the team is on whilst using the HoloLens. Once a layer is complete, the overseer is able to toggle the visibility of the next layer for the entire team to see. The overseer is also responsible to carry out checks on each layer to ensure there are no assembly mistakes or structural faults. 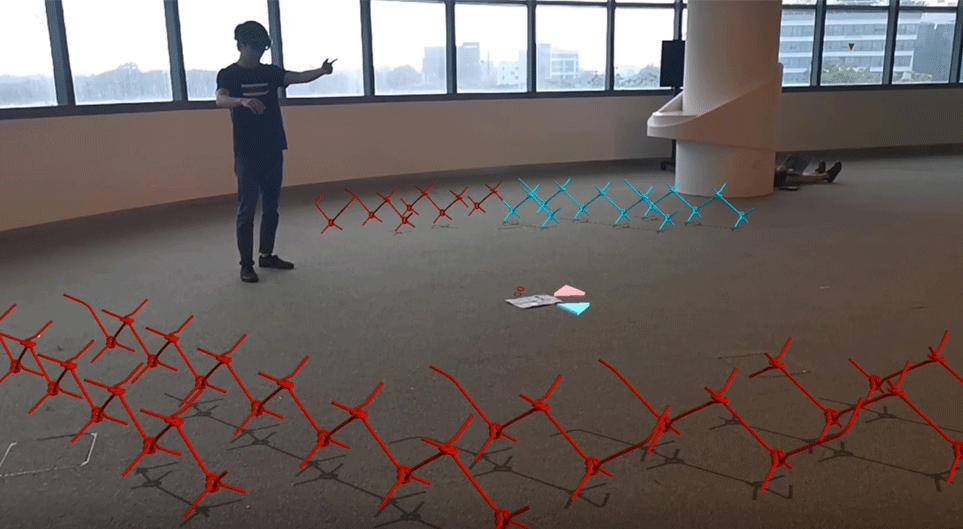 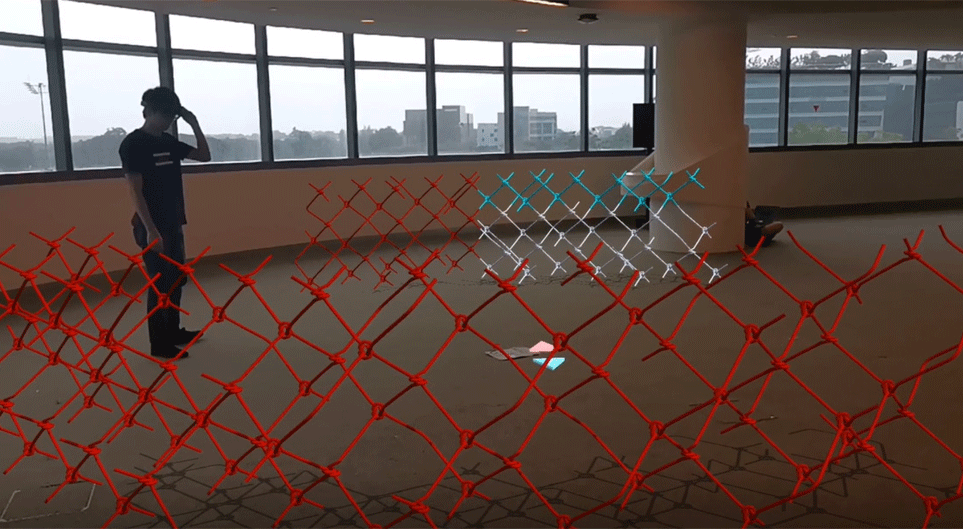 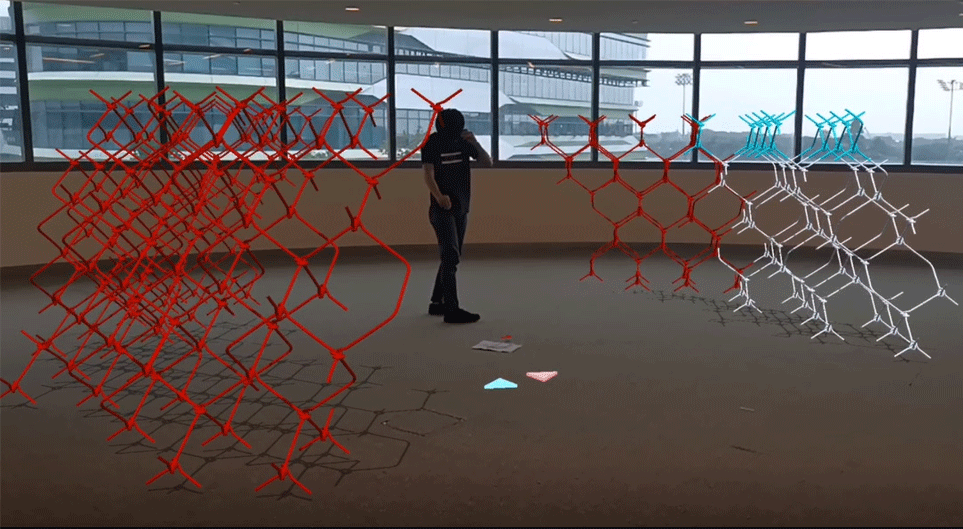 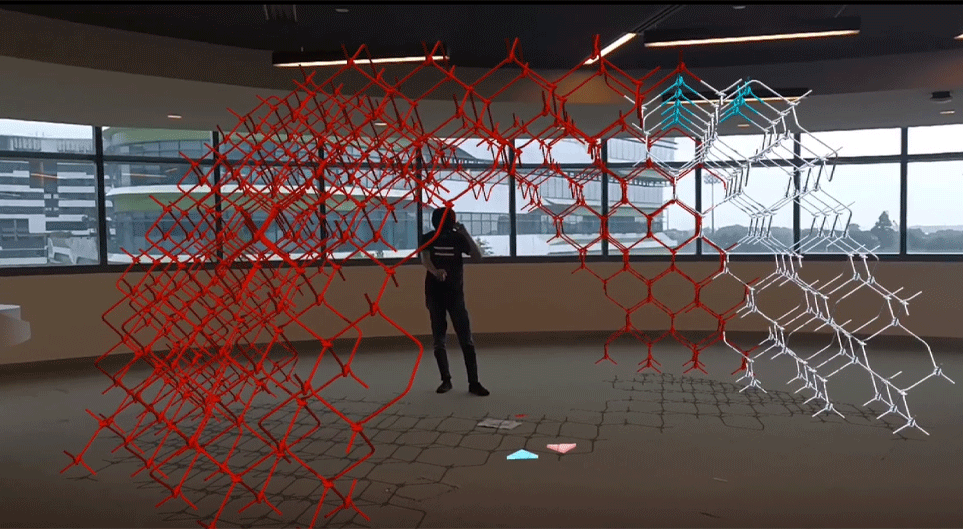 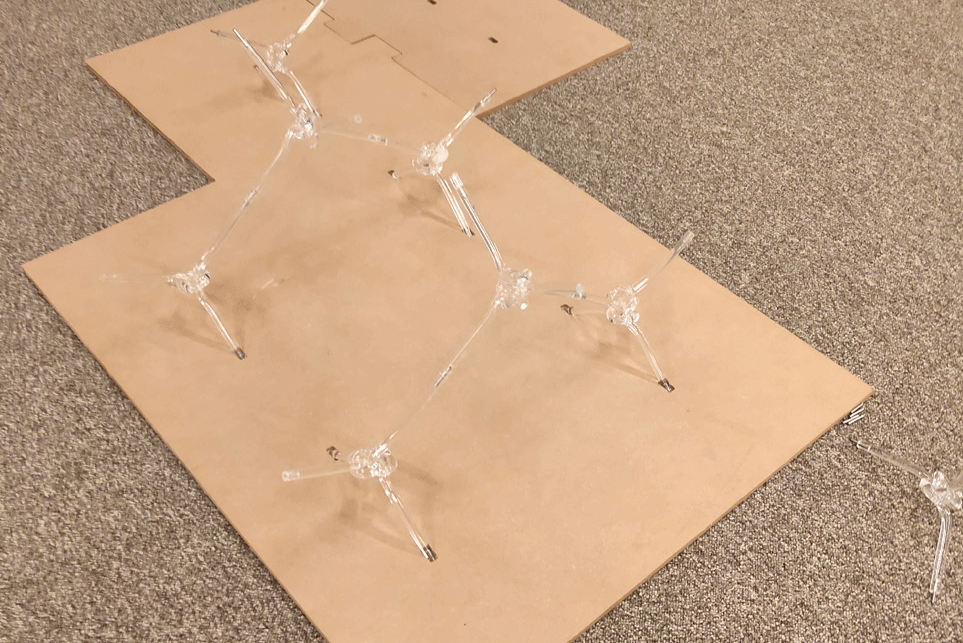 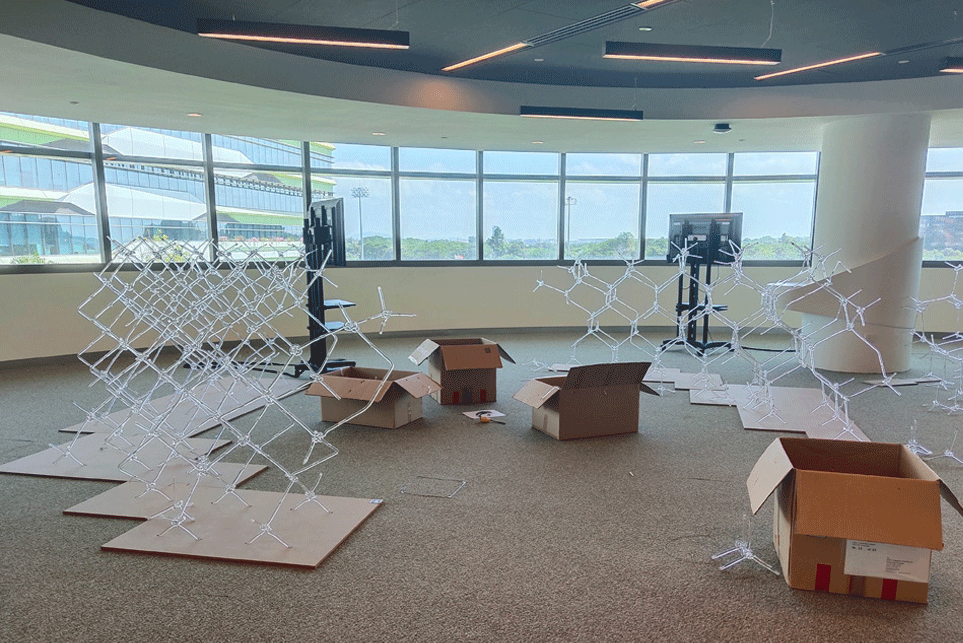 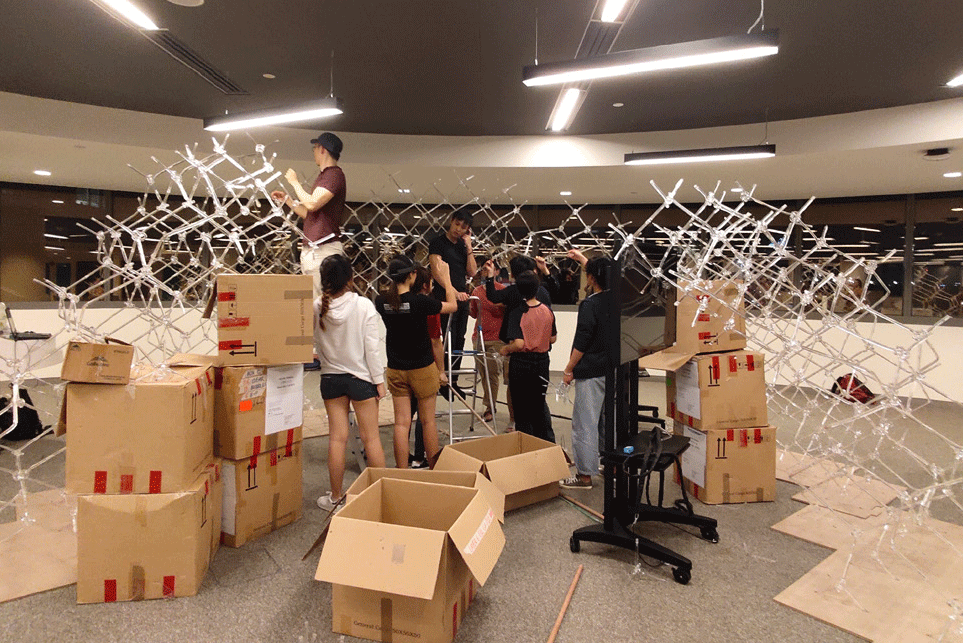 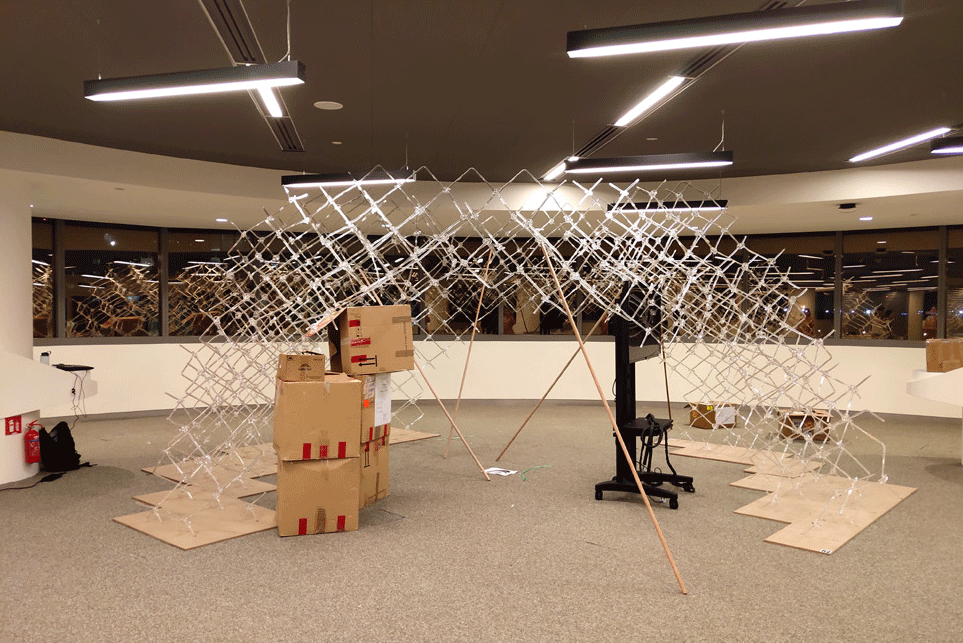 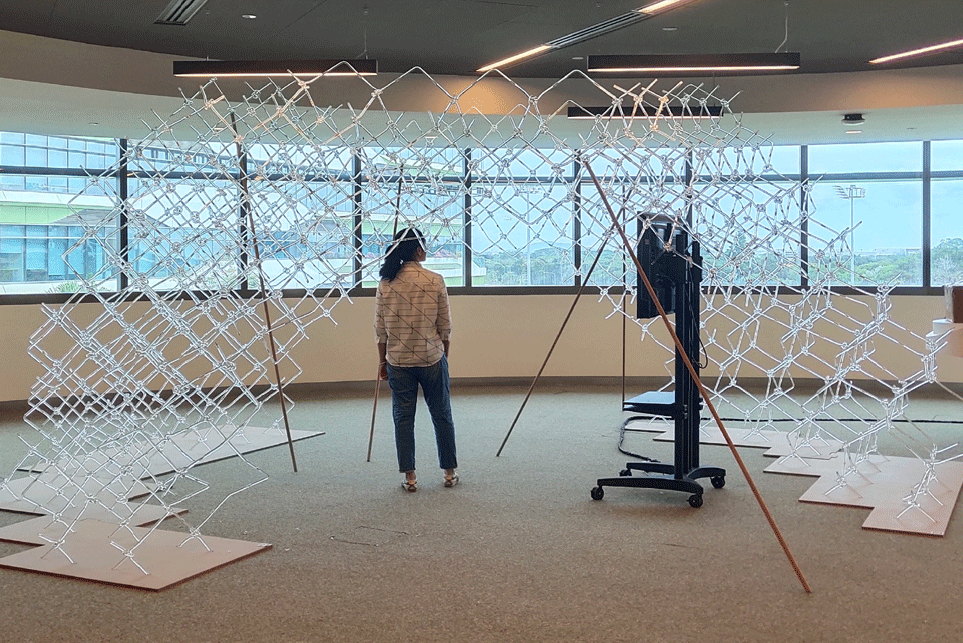 Learning Points
Given the relative newness of AR technology, the team faced some interesting problems whilst assembling the structure.
It is extremely difficult to implement a computer vision system that can track any imperfections of the structure such as sagging or even an incorrectly shaped building block. As a result, the virtual overlay that is supposed to aid the builders sometimes "float" too far away from the physical structure. When the problem persist, it is possible that this magnification can result in major inaccuracies of the final assembly. The result of which could be dangerous due to its structural integrity (or lack off).
Some possible solution could be adding some sort of physics engine in the backend of the virtual model that could simulate real-world gravity. This can better indicate to the builders that some parts of the assembly could be sagging and require additional attention and support.

Overall, the team recognised that this is an early attempt in exploring the use of AR in a very much coded and heavily regulated industry and was impressed that we managed to achieve something of value. The future of immersive technology in architecture and construction seems promising especially with the newer generations being keen in exploring its application in the industry. Only time will tell if this could some day revolutionise the industry!
Special thanks to studio instructor Prof. Jason Lim of SUTD and my teammates:
Paris Lau
Thet Naung Oo
Ye Huzheng
Samson Sim
Lee Hsien Toong (Video credit goes to him)
Heong Kheng Boon
Qiuji Song
Written by Emir Hamzah in 2019
Published in 2021 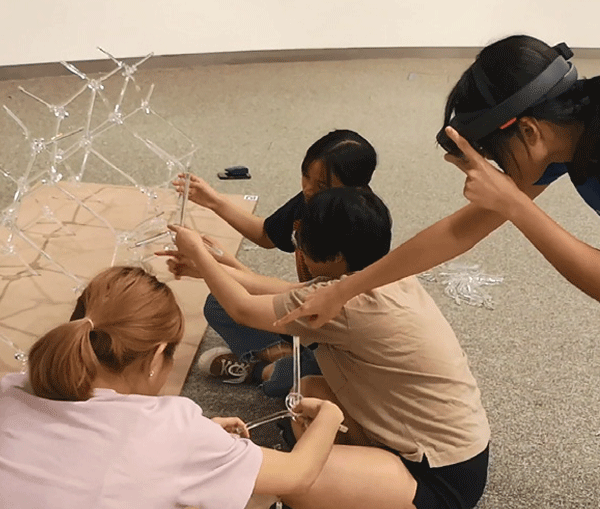